The Basilica of St. Peter in the Vatican City

The Basilica of St. Peter is in the heart of the Vatican City, an independent sovereign state on the right bank of the Tiber river, in the centre of Rome

The Vatican State is the smallest State in the world, and what remains of temporal dominions of the Church, which were annexed to Italy at the end of 1800’s with the unification of the country 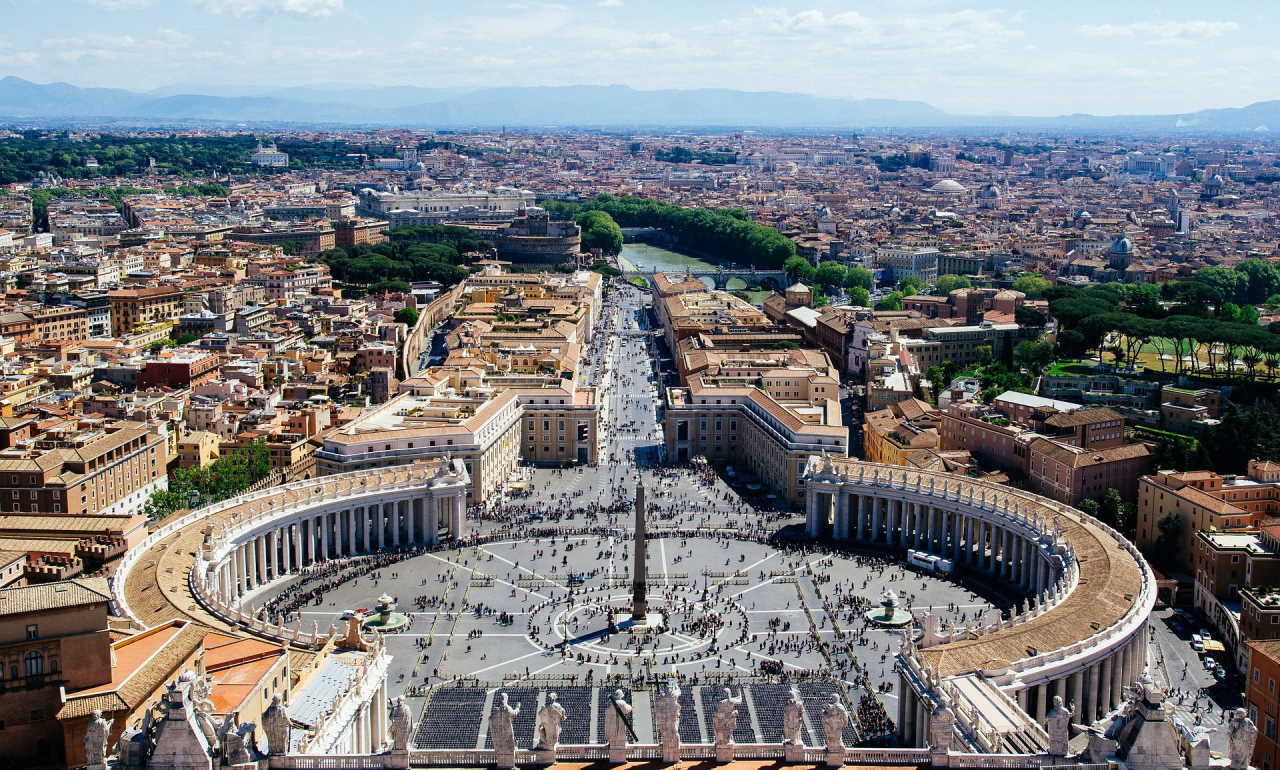 The Basilica stands on the foundations of the Constantinian basilica, that stood for over a thousand years on a sacred area of Pagan-Christians mausoleums.
The Basilica as we see it today, with its ribbed dome stands impressively in its square which seems to welcome all the pilgrims of the world in the embrace of the Mother Church. It was designed by the most famous architects and geniuses of the Renaissance and Baroque time 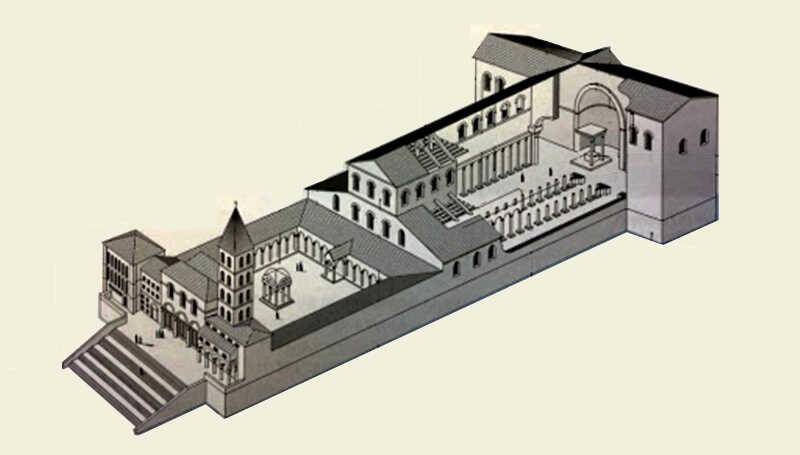 St. Peter’s Square with its famous colonnade which represents one of the most brilliant ideas of Gian Lorenzo Bernini, is 320 meters wide with a central ellipsis of 240 meters and is surrounded by 4 rows of 284 columns and 88 pilasters. The balustrade above the columns is decorated with 140 statues of Saints. Below, a huge stairway of three flights flanked by the statues of Saint Peter and Saint Paul. In the centre of the square, there are two great fountains and an obelisk. 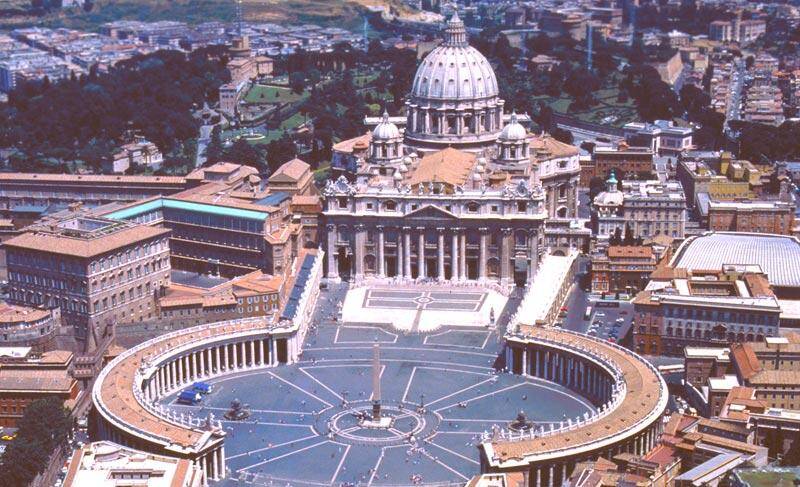 The façade of the Basilica -14.69 mt. wide and 47.3 mt. high – is made of travertine of Tivoli. It features a unique structure of Corinthian columns and frames a broad central portico with two arcades on either side (the one on the left leads to the City of the Vatican); above, nine balconies with windows (the central one is the loggia of the blessings) and a canonical attic surmounted by the balustrade that supports thirteen statues. Five bronze doors lead inside. In the middle of the church dominate the magnificent “dome” by Michelangelo and the smaller domes of the Gregorian and Clementine chapels.

Inside, the Basilica is 186 m long (218.7 with the portico, or front hall), the main nave is 46 m in height and the height of the dome is 119 m. Under the dome is the papal altar, with the famous canopy by Bernini rising over it. The sumptuousness of the interior is breathtaking: 45 altars, 11 chapels, around 10 thousand square metres of mosaics and many other masterpieces, such as the “Pietà” by Michelangelo. The tombs of several popes can be found under St. Peters Church.

Constantine, the first Christian Emperor, wanted the building of the Basilica in 315 AD exactly on the site where the tomb of Christ’s first Apostle was worshipped. 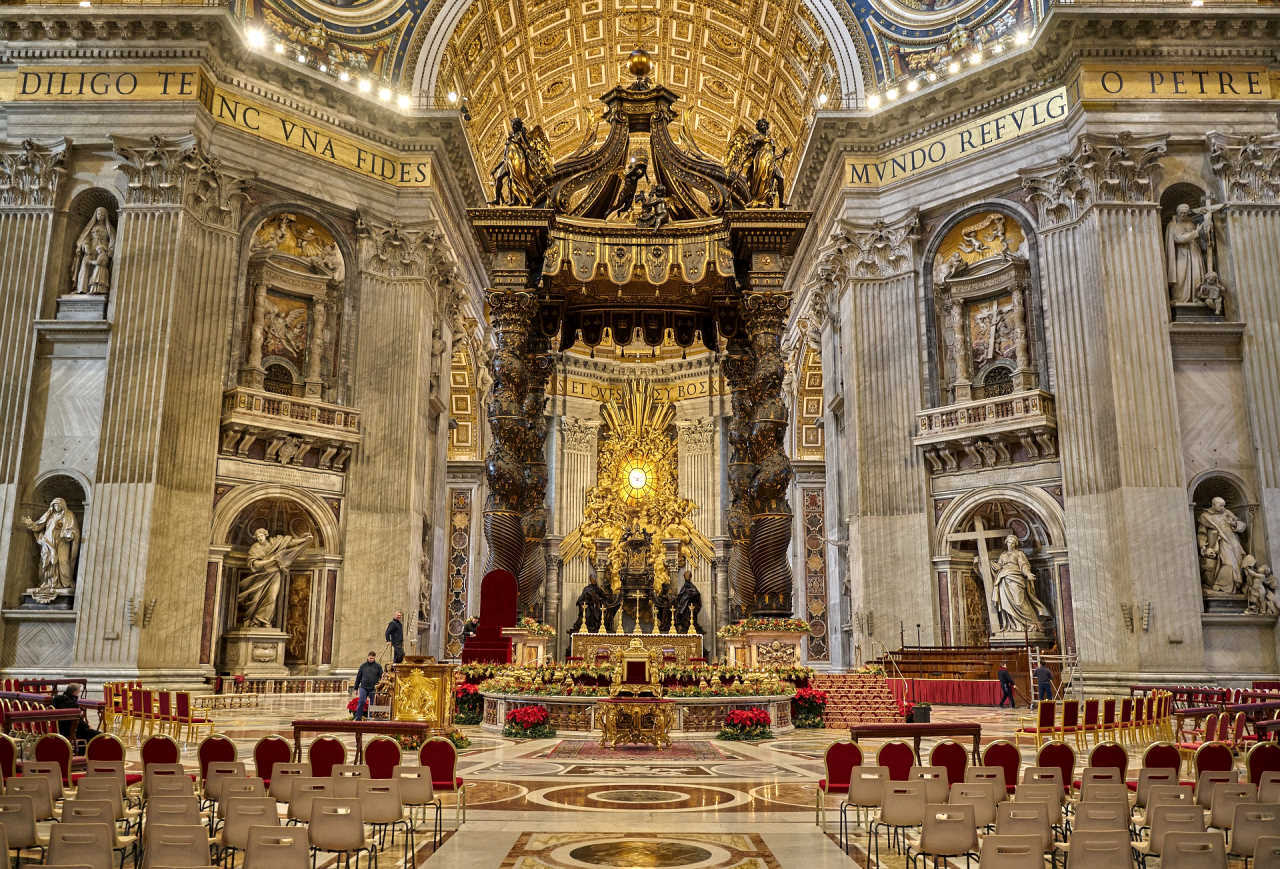 Originally the Vatican area was an unhealthy and uninhabited place. Its condition improved at the beginning of the 1st century when the area closest to the Tiber River was reclaimed.

Following works saw the creation of gardens, large parks, villas and outstanding buildings, such as Naumachia Vaticana, probably used for water games and the Mausoleum of Hadrian, today is known as Castel Sant’Angelo and the private circus of Caligula. 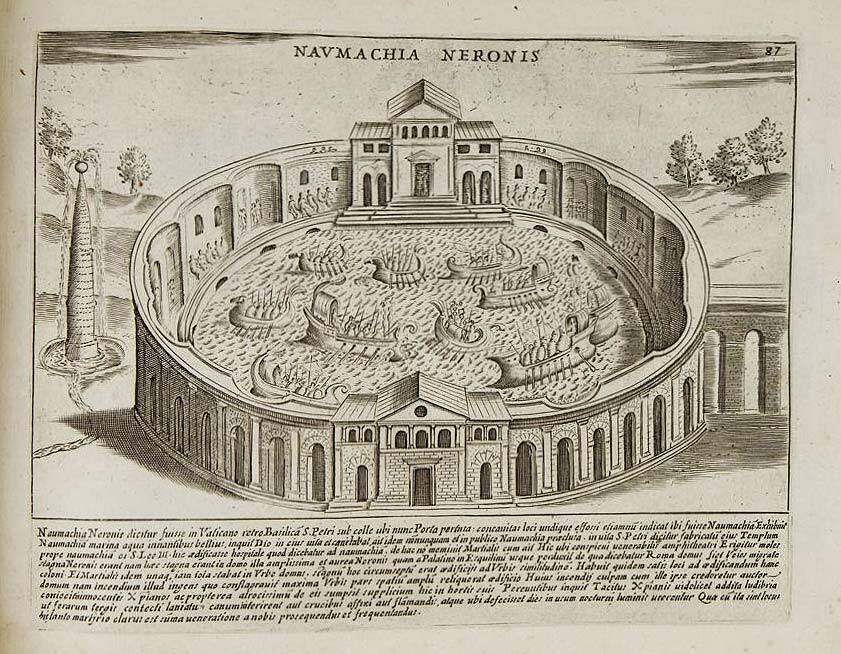 Along via Cornelia there were tombs, altars and sepulchres, in total respect of the Roman law that prescribed for all burial places to be located outside of residential areas.

Built by Emperor Caligula between 37 and 40 AD, the building was located on the left side of the current basilica, in the valley leading down to the river. The circus was the stage for the first persecution of the Christians by Nero.

The position of the circus has been known since at least the 1600’s, also due to the fact that the obelisk rising in the centre of the circus stood in its original place until 1586, when it was moved to the centre of St. Peter’s square upon orders of Sixtus V.

The event is reported by Domenico Fontana in his book, Della Trasportatione dell’Obelisco Vaticano et delle Fabriche di Nostro Signore Papa Sisto V, Roma 1590 (“about the transportation of the Vatican Obelisk and the works undertaken by His Holiness Sixtus V”).
The operation costed 40,000 scudi, 800 workers, 140 horses and 40 hoists; Sixtus V emanated an order with the death penalty for anyone who obstructed works, or even made noise: the lifting operations took place in absolute silence and had to be accompanied only by the sound of a trumpet. It is said that Fontana had his horse ready for the escape in case the obelisk had fallen during the operation. Fontana succeeded in his work also thanks to one of the workers, the sailor called Bresca, who seeing that the supporting ropes were about to break, broke the silence by shouting out “acqua alle funi!” (water to the ropes!).

The circus was already out of use one hundred and fifty years after its construction, at the time of Emperor Caracalla, when a large circular mausoleum was built above the circus not too far from the obelisk and later dedicated to St. Andrew. 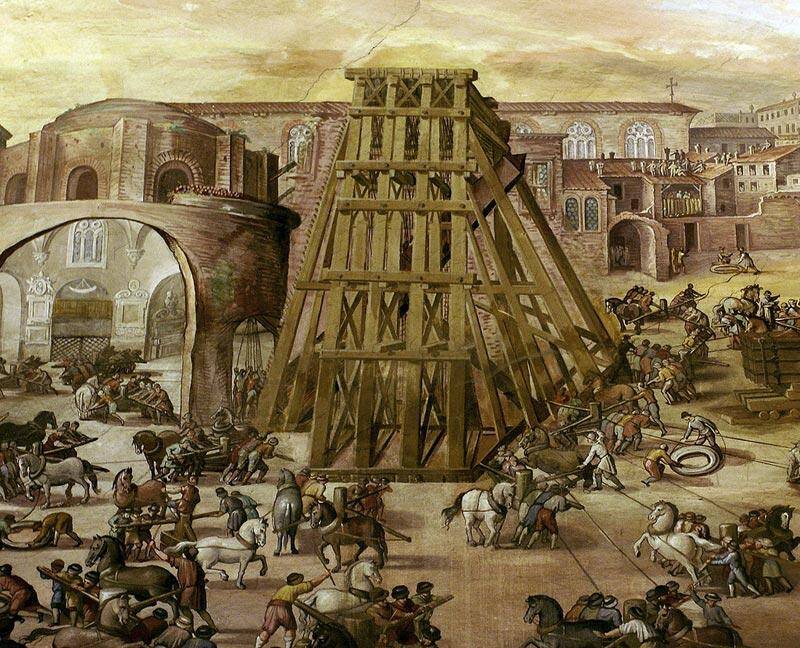 The radical transformation of the entire Vatican area took place in the 4thcentury when Christianity rapidly took over pagan worship. After the abdication of Diocletian, responsible for the last great persecutions, the wars of succession to conquer the power ended with the nomination in 307 AD of Emperor Constantine.

Son of one of Diocletian’s generals, Constantine was recognised as Emperor in 312, after the defeat at Saxa Rubra, near Rome, of his rival Maxentius, on October 28th, who drowned in the Tiber river. The following year, the Emperor established the liberalisation of the religion with the Edict of Milan, ensuring that Christianity was no longer obstructed and could be worshipped freely. From then on, political and religious powers were no longer unified in the person of the Emperor, to the point where in 330 AD the capital was transferred to the East, leading to the founding of a city named after himself on the Bosphorus: Constantinople. He made Rome the religious centre of the Empire and for this purpose started an intense building program that had to give to the rising Church its worthy places of worship. The first building erected was the Basilica, in order to assure an adequate celebration of the prince of the apostles. The church of San Giovanni in Laterano followed, then the Papal residence and the Imperial Palace; followed by Santa Croce in Gerusalemme, San Pietro and Marcellino, San Sebastiano, San Lorenzo outside the walls and finally the church of Sant’Agnese.

St. Peter’s Basilica grew also thanks to works and donations made by princes and popes; in 800 Charles the Great was crowned by the Pope Leo III, after him was Lotario, Ludovico II° and Federico III°. 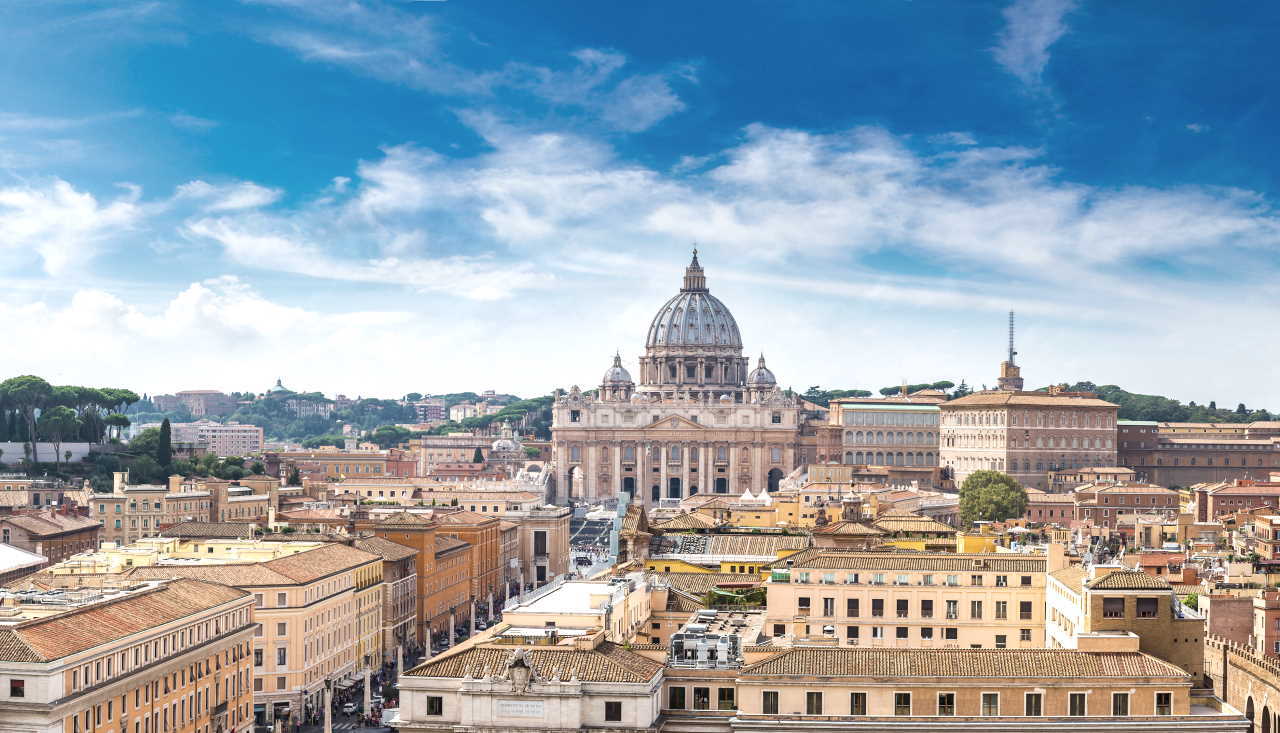 At the beginning of the Early Middle Ages, the city of Rome went under a progressive decline, no longer the heart of a great Empire but the target for sacking by the Barbarians, by the Goths of Alarico (410) and by Vitige(537-538), by the Vandals of Genserico (445), who cut the aqueducts to bend the city and finally by Totila (545-546). One thousand years after its foundation, St. Peter’s was going to ruin and Niccolò V° decided to undertook extensive works of restoration upon suggestion of Leon Battista Alberti and the project of Bernardo Rossellino.

During the Renaissance in Italy and in Europe a new cultural and political climate was breathed, the rebuilding of Rome began (the urban situation of the period and the transformations) on the initiative of a new generation of popes who saw the building works as a means for reaching them asses that, Niccolò V°, the humanist pope, thought needed to be fascinated by grand works.

And so began the magnificent plan of Niccolò V, the restoration of ancient monuments that could be used as the infrastructure of the papal city: the Aurelian walls, the bridges, the Mausoleum of Hadrian transformed into a castle, several aqueducts, the reconstruction or repair of the forty basilicas making up the Holy Stations of pilgrimage and finally the creation of a small city on the Vatican hill, seen as a holy city different from the profane city, on the other side of the Tiber and connected only via the bridge of Castel S.Angelo.

Niccolò V only managed to complete a small part of his project. The new basilica was constructed by Giulio II Della Rovere. Works began with the demolition of a large part of the old church, following the project of Bramante, with the intention of building a Greek cross plan edifice inspired by the Pantheon. The central pillars of the design by Bramante were created, with the large support arches of the dome, and the spaces created adjacent to the central part, then works stopped for 20 years.

In 1527 there was the terrible sacking of Rome by the Lanzichenecchi. The direction of works was then continued – with strange and recurring competition between Greek cross plan and Latin cross plan – by Frà Giocondo, Raffaello, Giuliano da Sangallo, Baldassarre Peruzzi, Antonio da Sangallo il Giovane and finally Michelangelo, who re-applied the design of Bramante, restructuring the smaller areas surrounding the central part and beginning the construction of the dome, which was only completed under Sixtus V in 1593 by Giacomo Della Porta and Domenico Fontana. Under the pontificate of Paul V the decision was made to restore the basilica with the definite return to the Latin cross plan. Architect Carlo Maderno added three chapels to each side of the building and conducted the naves up to the current façade (begun in 1607 terminated in 1614 and restored on the occasion of the Jubilee 2000).

Maderno’s works was criticised by many because hiding from view the tambour, the rising effect of the dome is dampened. The consecration of the new basilica was celebrated by Urban VIII in November 1626. Upon conclusion of this grand work, the construction of the city was stopped, but the miraculous balance between ancient ruins and the Baroque scenes of papal Rome is so great that it has fascinated and enraptured great travellers such as Byron, Goethe, Stendhal… 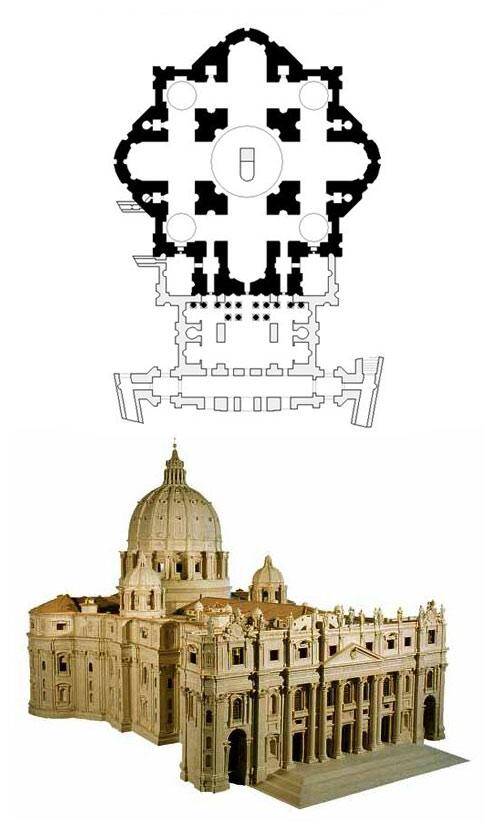 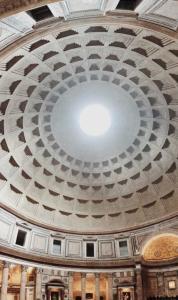 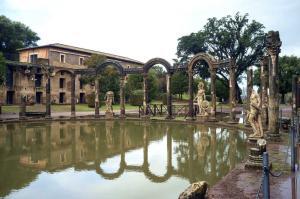 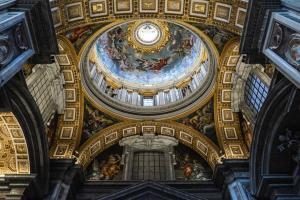 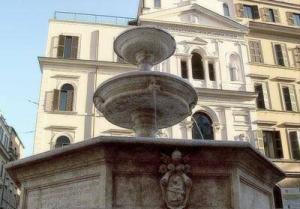 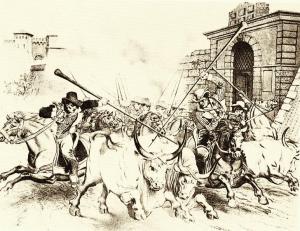 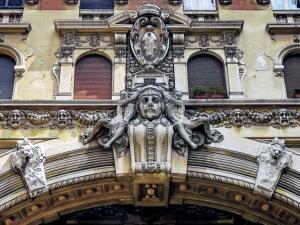